Broccoli or Cauliflower? Neither - it's Romanesco!

It seems to me that this member of the brassica family suffers from a bit of an identity crisis. It knows it’s Italian. Indeed, it has been recorded as growing in that beautiful country since the 16th century. But it’s not really certain if it is a broccoli or a cauliflower. Even experts can’t quite decide whether it should be counted as being in the Brassica oleracea Italica Group - which would place it alongside broccoli – or whether it belongs to the Brassica oleracea Botrytis Group – which would mean it’s a cauliflower: to date the majority seem to come down on the side of the latter. But, in order to avoid any further confusion, I’m going to call it Romanesco, pure and simple.

Without further ado, as they say, let me introduce you to Sig. Leonardo Pisano Bigollo, (aka Fibonacci). He was an Italian mathematician whose life straddled the 12th and 13th centuries. Sig. Bigollo was one of those people responsible for spreading the Hindu-Arabic system of numbers in Europe. This had far-reaching consequences, since it replaced the more awkward Roman numeral system. He also discovered, and introduced, a very special sequence of numbers, in which each number is the sum of the previous two numbers: 1, 2, 3, 5, 8, 13, 21, 34, and so on. Many of you will, of course, recognise this arrangement of numbers as the Fibonacci sequence.

‘Hang on a minute!’ I hear you cry. ‘She’s finally lost the (vegetable) plot! What do number systems and Italian scientists have to do with Romanesco?’ Is this some kind of Da Veggie Code, with hidden meanings? 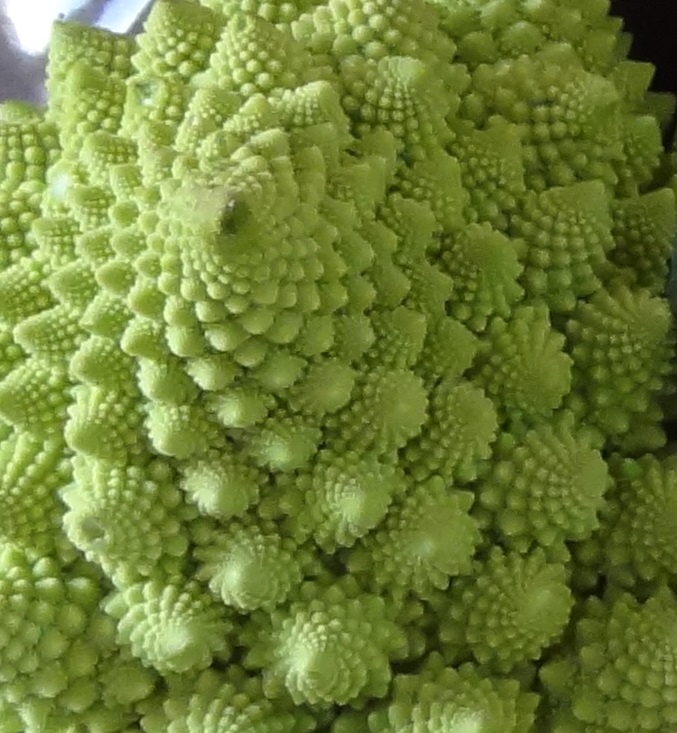 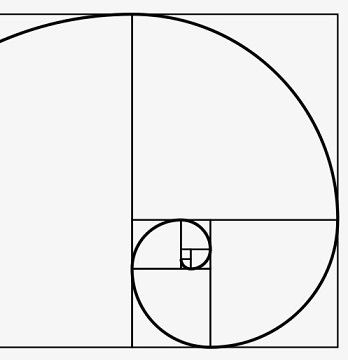 Well, tale a closer look at a head of Romanesco. Taking the centre as your starting point, you can trace a spiral, along which smaller florets are arranged: this is a Fibonacci spiral, based on the Fibonacci sequence. Romanesco isn’t the only instance of the Fibonacci spiral occurring in nature – the arrangement of the scales of a pinecone, the cross-section of a nautilus shell, the tiny, individual, flowers on the head of a sunflower, are all examples of this configuration.

As if this was not enough science, you can easily see that the head of an individual Romanesco is made up of many smaller heads which ‘mimic’ the larger, whole, head – this phenomenon is known as a ‘natural fractal’ or phyllotaxis, or rather, more precisely, an approximate fractal, because a head of Romanesco can’t go on for ever, unlike a ‘proper’ fractal. There is an end point to it.

This post isn't sponsored: I had these seeds to hand!

Perhaps it would be fun to plant your Romanesco in a spiral too, just to keep the design idea going a little further. But on second thoughts, it might be as well to stick to a more conventional planting layout where you plant your Romanesco in rows 45cm apart with 45cm between the rows. Before you get to that stage, however, you have to sow some seed. You can sow it indoors from as early as February onwards. Individual modules are ideal for this, as this method will cause a minimum of root disturbance. This will be very beneficial when the time comes to plant out your seedlings, i.e. as soon as they have formed 3 or 4 ‘true’ leaves – usually about now, in May or June.

Alternatively, you can sow the seed now directly into the vegetable bed. Sow it sparingly, in order to avoid too much waste. Your frugality will pay off nicely when you then proceed to ‘thin out’ the rows of seedlings later, to achieve their final spacing of 45cm.

Romanesco is a member of the brassica (cabbage) family, and as such it needs a little bit of TLC, so that you can achieve the best possible crop. First of all, all brassicas prefer to grow in slightly alkaline soil. This means that you should run a pH test before you plant. If necessary, you can add some lime to the soil to bring the pH level up a bit. Second, your Romanesco can be troubled by certain pests and diseases. The most prolific ones are cabbage white butterfly, cabbage root fly, and club root. The easiest way to guard against cabbage white butterfly is to place insect-proof netting (such as Enviromesh) over the plants, so the butterflies fly off to a more accessible birthing suite!

As far as the root flies go, as well as using netting, you can place a ‘collar’ around the stem of each plant so that the female fly can’t get to the soil to lay her eggs: any eggs that she does lay on the collar usually fail to hatch. You can buy dedicated brassica ‘collars’ from the garden centre, but homemade circular or square collars, about 15cm across, cut from cardboard will do the job just as well – and they are cheaper! Make sure, too, that you diligently put into practice a system of crop rotation on your vegetable plot; otherwise, root flies will emerge from any overwintered pupae that managed to avoid any deterrents.

Abiding by a regular practice of crop rotation is especially important if you (or rather your plants) want to avoid being infected by the dreaded club root. By rotating your crops, so that you don’t grow the same thing in the same place for at least three years, you can help reduce the build-up of diseases that affect a particular crop – in this case, club root. Club root is a widespread fungal infection that attacks the roots of all brassicas. The roots then become swollen and distorted, and this is leading to sickly plants, which will probably perish. This is less likely to affect your plants if the soil is sufficiently alkaline and not too wet.

Having said that, Romanesco do need sufficient moisture, otherwise the heads will not develop fully and properly. A good application of well-rotted manure before you plant will go a long way towards helping to retain moisture. You should also provide your plants with a good feed. Once the plants are growing well, you should give them a portion of high nitrogen fertilizer at a rate of about 30g per square metre: this will encourage more growth and help the heads to form.

Although I have dwelt on its extraordinary shape, I have not as yet mentioned the other remarkable feature of Romanesco: its amazing colour. Forget your conventional cauliflower cream or broccoli green - it’s more lime green or chartreuse – either way it is quite out of the ordinary! It’s long been said that you eat with your eyes as well as your mouth: well, pop a portion of this on your plate and you’re wondering what’s to come!

Taste-wise it’s difficult to pin down exactly: it has a sweet nuttiness which is subtle, and quite unlike the taste of either cauliflower or broccoli. What is certain is that it lacks the slight bitterness that cauliflower can have – perhaps that’s why my grand-daughter will eat it but will, at the same, pull a face at cauliflower. In fact, one of her all-time favourite dinners is pasta with a sauce made of the tiniest florets of cooked Romanesco, some grated cheese, and a spoonful or two of crème fraîche (easy cauliflower cheese in other words).

You can, of course, also serve Romanesco as an ordinary vegetable accompaniment or as a suitable substitute in any recipe that calls for cauliflower. I have used it in place of cauliflower in piccalilli: to my mind, it looks brilliant, because it holds it bright green colour so well - and it tastes better too, on account of its slightly nutty flavour.