Easter - what colour springs to your mind?

What’s the first colour that springs to mind when you think about Easter? For me it’s yellow. Fluffy yellow chicks; yellow-gold of the foil around my Easter egg (if I get one, that is) – but above all, flowers, and a particular parts of a couple of them – I’ll explain about the parts later.

First, the Lenten Lily, or daffodil. Or strictly speaking Narcissus pseudonarcissus. I’m pretty sure these are the golden daffodils that Wordworth recalls from his nebulous perambulations beside Ullswater in the Lake District.

There has been much argument over whether Narcissus pseudonarcissus is a British native – and from the research I’ve done, the discussion is ongoing. However, we can be pretty certain that this daffodil is the one we see growing wild. The description given by the Royal Horticultural Society, who calls N. pseudonarcissus wild daffodil, describes it as ‘a small trumpet daffodil up to 35cm in height, with usually glaucous foliage and flowers 4-6cm in width, with deep yellow trumpet and pale yellow perianth segments’. That’s the one!

Its most common name is Lent Lily or Lenten Lily because it can usually be found flowering during the period of Lent, which begins on Ash Wednesday and ends at Easter. Given that Eater is a moveable feast (Easter Sunday being the first Sunday after the full moon after the spring equinox - so the earliest Easter can be is 22nd March, and the latest, 25th April) and the vagaries of the weather, it could be that our little daffodils are well and truly over by the time Easter arrives. They are little in comparison with their cultivated relatives, some of which can grow up to 50cm in height, but what they lack in stature they make up for in abundance because they will happily colonise an area if they like the conditions. However, please don’t be tempted to dig any from the wild to put in your garden: there are legal ramifications. Besides which you can buy bulbs from reputable nurseries and suppliers.

My second yellow Easter flower, the primrose, Primula vulgaris is also a wild flower. Both the common and Latin names give us a lot of information. The common name is derived from the Latin prima rosa, which means ‘first rose’ of the year; its flower does look like a miniature single rose. But it seems disrespectful to call these little beauties vulgaris until you realise that it means ‘common’ in its original sense of ‘widespread’. This tells us that it was once indeed widespread throughout Britain, but like so many of our native plants loss of habitat has seen a decline in its numbers. So, like the Lenten Lily, please source your plants from a reputable nursery. 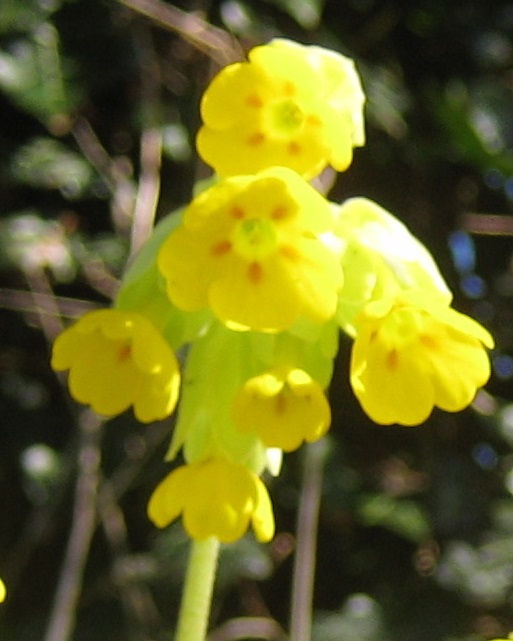 I remember that when I was a child, primroses, along with their cousins the cowslip, Primula veris, my third Easter flower, grew abundantly on the land of our local farmer. He allowed me and my sister to wander quite freely in the copse, where we would find primroses, and in the pasture where the cowslips grew, even allowing us to pick a few to take home for our Mum.

One abiding memory I have is, one sunny afternoon during what must have been a late Easter holiday, lying face up in one of the fields looking at the clouds, surrounded by cowslips. The sweet, honey perfume and butter-yellow colour of those fairy bells will stay with me forever, they are my ‘scent of memory’: Proust has his petites madeleines, I have my cowslips.

I mentioned earlier that parts of flowers also remind me of Easter. My first ‘flower part’ is saffron. Saffron is the name given to the dried, deep-red stigma of Crocus sativus, an autumn-flowering crocus with rich lilac flowers.

You can grow your own in a sunny, well-drained spot, but be warned it takes about 150 flowers to produce one gramme of saffron – no wonder it’s the most expensive spice in the world. When it’s added to recipes it adds a rich golden-yellow hue, so distinctive that the name saffron has become synonymous with the colour itself.

So, where’s the connection with Easter? It’s simnel cake, a bit like Christmas cake but much lighter. We’re used to seeing a round fruit cake topped with a layer of marzipan, and often with a layer of marzipan in the middle, finally decorated with 11 marzipan balls representing the good apostles. This decorated form probably dates to the ‘Bury Simnel' of 1863 which was presented to Queen Victoria. Many people think that the marzipan was coloured with saffron to make it a buttery-yellow colour rather than the pale almond colour of its main ingredient. But the saffron was originally added to the cake itself, which, surprisingly, was boiled before it was baked. Here’s a poem from the intriguingly named 1867 book Copsley Annals: Preserved In Proverbs, by Emily Elizabeth Steele Elliott (my emphasis):

She who would a simnel make,

Flour and saffron first must shake,

Chop and pound till arms do ache:

Then must boil, and then must bake ….

I’m not sure I’m up to all that chopping and pounding. But I do think I’ll have a go at a modified version, making a light fruit cake with added saffron, but also including the layer of marzipan in the middle and decorating it with marzipan with a few added extras – perhaps some primroses ….

I’m being a bit disingenuous with my last ‘part’ because it’s not part of the flower - it’s actually the leaves of a plant with yellow flowers. The plant is tansy, Tanacetum vulgare. Grown as an insect repellent and strewing herb (it’s mentioned as such by Tusser in his Five Hundred Pointes of Good Husbandrie of 1557) and to remedy gout and intestinal worms (!), its bitter leaves were also used in tansy puddings, known simply as Tansies. They were a bit like custard tarts, flavoured with the juice of young tansy leaves which were eaten on Easter Day as a remembrance of the bitter herbs eaten by the Jews at the Passover.

So, there we have it - my yellow flowers (and parts of flowers) which remind me of Easter. All that's left for me to say is - Happy Easter everyone!

Would like to win a copy of my book The Little Book of Popular Perennials? Just sign up to the mailing list – the form is in the footer – and your name will be entered into the draw to be held this afternoon, so hurry!