I remember reading Edward Lear’s poem The Owl and the Pussycat many years ago, imagining the strange bedfellows walking on the edge of the sand and dancing in the light of the moon.

I skipped over the bit about them eating mince and quince, though, and it was some years before I became fully acquainted with the fruit. I made the jaw-breaking blunder of trying to bite a chunk out of one, in much the same way as you might bite into an apple. Its fragrance was tempting beyond endurance. That was a big mistake.

It took several days for my masticating muscles to recover. What I didn’t know at the time (and found out the hard way) was that in its native, warmer climates of the Middle East you can indeed pick the ripe, soft, golden fruits straight from the tree, but here in the UK quince is as hard as rock when freshly picked - it needs cooking to the point of softness to release its aromatic sweetness, the taste of which is unrivalled.

Apparently, I wasn’t the only one who yielded to the temptations of the quince. Myth has it that it was a ‘golden apple’, the quince, and not an ordinary apple, that Eve succumbed to – not that I’m comparing myself to Eve, of course. And according to Greek legend, Paris awarded Aphrodite the ‘golden apple’. Calling it an apple is misleading, however, since the quince is neither apple nor pear, another fruit that it resembles. Quince, whose Latin name is Cydonia oblonga is remarkable in the taxonomy of plants in that it is the sole member of a Genus – you certainly won’t find a Cydonia circula or Cydonia quadrata!

Also, don’t be confused with the Japanese quince, Chaenomeles sp. These spiny shrubs are grown primarily for their flowers whose colour ranges from pale pink to deep red. They can produce edible fruits, but these are totally different to ‘our’ quince.

But there’s a few things to consider before you have the joy of harvesting your own fruit. First of all, of course, you need a tree! There are many varieties to choose from – I found 11 in one on-line catalogue and apparently there are over 20 available if you scout around a bit. However, the most widely grown, most readily available, and most successful in our northern climes appear to be ‘Meech’s Prolific’, ‘Vranja’ and ‘Leskovac’.

You will find that the majority of quince trees have been grafted onto a rootstock which will determine the eventual size of the tree. Grafting is when the upper growth (known as the scion) of a plant is joined to a different lower growth, including root, (known as stock or rootstock), of another plant, to combine the desirable qualities of both.

The most common rootstocks are ‘Quince A’ which is classified as semi-dwarfing or semi-vigorous, depending on which text book you read, and will reach a height of between 3 and 4.5 m; and ‘Quince C’ which is dwarfing, and will reach a height of 2.5 to 3m. If you buy a tree which has not been grafted, it will grow into a gawky, unwieldy beast - much like many a teenager - but that’s fine if you have the space.

The tree’s gracelessness will be transformed into gracefulness each spring when it is clothed with blossom. To my mind quince has the most beautiful blossom of all the fruit trees: it has large, open, inviting flowers which are sugary pink fading to white – a confection without being cloying

Plant your quince tree as you would any other fruit tree in neutral, fertile, moisture-retentive soil, in a sheltered, sunny position. If you live in the north, try and find a south- or west-facing wall to grow a fan-trained tree against: it will reward you with better cropping if you can. Wherever you live you should avoid planting your tree in a frost pocket which will adversely affect the blossom. Talking of blossom, all quince are self-fertile so a single tree which hasn’t been cross-pollinated will still produce fruit. Don’t be surprised, however, if your tree acts like the aforementioned teenager for a few years, promising much but producing little. Be patient – it will eventually be a tree to be proud of.

The best time to plant your tree is in the dormant season between November and March. Water it well during its first growing season, and during any prolonged dry spells after that. Also give it a feed of a general fertilizer in February and a good mulch of well-rotted farmyard manure or compost each spring.

Most quince trees will already be two years old when you buy them, so you will have scarcely any pruning and shaping to do. For the first couple of years after planting you can simply cut back the leading framework branches by a half and prune any vigorous side-shoots back to two or three buds. Little pruning is necessary after the fourth year, except to remove dead wood, crowded branches or very vigorous shoots. All pruning and shaping should be done during the dormant season.

Pick your quinces during late September, October, or early November, depending on how well they have developed, and let them ripen slowly. Wrap them individually in newspaper and place them on a rack so they are not touching, in an airy, cool but frost-free place. Check the fruit regularly and remove any which show signs of decay.

Like many other foods, the pendulum of quince’s popularity seems to swing from one extreme to the other. Happily, it seems to be back in fashion. Traditionally, the quince is used to make a paste or jelly, called marmelada in Portuguese (which is where our word for citrus jam comes from) or membrillo in Spanish, which is eaten on toast, with cheese, or in pastries. You could make your own - even Gerard in his Herball of 1597 gives us a recipe for Marmelad using quince, sugar and rose water - and eat it in slices like the Owl and the Pussycat, but I have come across a version of quince jelly from The British Honey Company which incorporates honey - what else?! I like it on toast with a scraping of unsalted butter, plain and simple. (Click here to go to The British Honey Company’s website.) 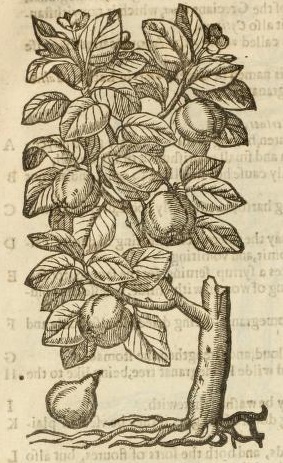 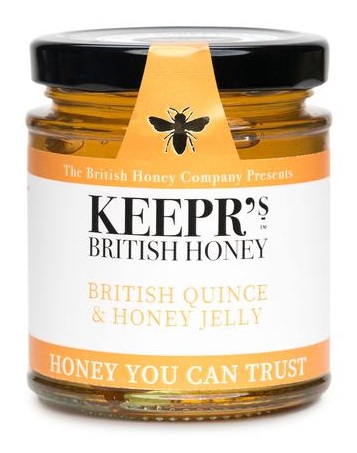 As far as any other recipes go, whenever apples or pears are called for, you can easily replace some of the fruit with quince. The flavour and fragrance is unsurpassed if you add them to an apple crumble, and they make a delicious accompaniment to pork instead of the usual apple sauce. My all-time favourite recipe, though, is this one that I have adapted from a mincemeat recipe that my Gran gave me.

50ml pear brandy if you can get hold of it, but ordinary brandy will do

Peel, core and cut the quince into chunks: be careful – the quince will be as hard as a rock and therefore devilishly hard to prepare.

Cook the quince in the orange juice until they are tender. Take the pan off the heat and squish the quince with a potato masher.

Peel, core and cut the pears into very small pieces: try to keep them small as this is how they will be in the end product - they won't break down like Bramley apples.

Put the quince into a large bowl and add all the other ingredients, except the brandy. Mix all the ingredients together, cover and leave for about 12 hours.

Preheat the oven to 120°C, gas mark ½. Turn the mincemeat out into a shallow, oven-proof dish, loosely cover with foil and heat for about 2 hours turning occasionally. This baking process is to prevent the mixture from fermenting after it has been jarred.

Remove from the oven, cool slightly and stir in the brandy. Spoon the mincemeat into warm, sterilized jars, pressing it down gently so that there are no air pockets. Seal the jars and store them in a cool, dry place for Christmas.

So now we're back to dining on mince(meat) and quince!